The other weekend I went out with Andrea Geile, a fellow artist and fellow female to conquer 2 of my last few munros on Bidean nam Bian. Saturday I had already ticked off the 2 others further south on Buchaille Etive Mor with Nick my long-term munro and rest of life cronie. But these ones on bidean nam Bian Nick has already done some 15 years ago, so he was not tempted.
After a night in Crianlarich hostel, Andrea and I set off from the car park at 8.30 am over the mossy ground, up the rather steep gullie, up, up, so green, weather as reported rain and not rain, half an hour in it rains, heavily, put on anorak, over trousers, will it hold?, Rab, not the best, 2 minutes later, it stops, take them off again, up, up, we see the lochan, there should be 2 more, up to the ridge, talking all day, a change from my days with Nick, which are considered by silence and contemplation.
On reflection, two conversations were knitted into the day. One about our various climbing tours in winter and in summer in Switzerland, and in France, and Scotland, and Uganda, and Austria and elsewhere (often sponsored by our energy employed husbands). The kind of conversations hill walkers, climbers, outdoor folks can go on about, for hours, comparing crags, weathers, views, steepness, grades, distances, the huts, the tents, the cookers and the latest water proof gadgets.

The other one was the economy and welfare of the artists. Why are the artists so often not paid, should we pay them more, because they deserve more, or because we feel sorry for them, or should they ask for more, because they deserve it, for their work, or should it become a law, that they are paid more…
Walk on, steep scree, to the top of the hill, Stob Coire nan Lochan, and then the next one, the real one, and the clouds, and then the sun, and the bealach, and the view, the endless green surreal, the crags, the cairn, the loch on the horizon, the moor, Rannoch. 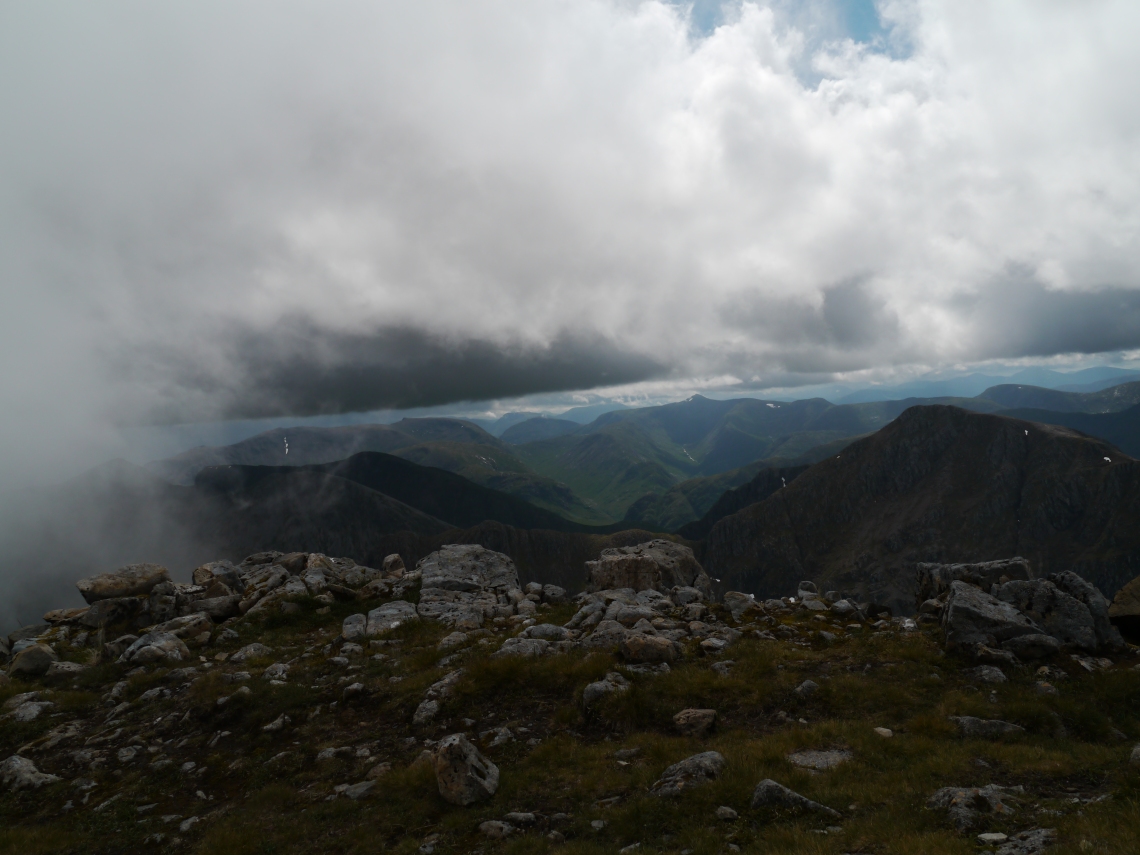 Artists, traditionally have always been both on the money and on the political edge, always on the balance. They highlight inequalities and other miss-stands. But why don’t they fight for their own rights? West Africans have fought to end slavery, women have fought for equal pay, unions fought for minimum wage, oil workers for safer environments. Why do artist not fight for their right of pay, why do they offer their work for no or next to no money, often they even pay parts themselves, I am told, why do they do that?, where would we be if everybody did that?, if the bakers weren’t paid and the technicians, the bankers and the gallery directors? don’t they understand that we live in a capitalist society, unless one moves to one of the few tribal societies left, there is little escape, so one must play the game, why don’t they fight for their rights? with their art, with their feet?
Rannoch, the view, Joseph springs to mind, he liked it here, walking has always played an important part in politics, in fighting for rights, peace walks, suffragettes, indigenous societies, many of them walked in the cities, in the country, across countries, across continents, for their rights.
Is there an artist in Scotland to mobilise other artists to do a fight for their rights walk across the country, from gallery to gallery, from residency space to residency space, from Glasgow to Helmsdale, from Stornoway to Stirling, from Edinburgh to Aberdeen, to check on their payment record for artists. Picking up artists on their way and in the places, asking them of their views, why do they do that, working for nothing, or next to nothing, do they like to get themselves exploited, do they not realize that they are exploited? Do they not mind to be exploited? Do they see their work as a hobby? Or are there just too many, for this capitalist economy to cope? Do they simply become hobbyists (no can’t be, artists are the greatest people – in my view anyway), do they see themselves as not deserving, as hobbyists? We need to get to the bottom of this, to find out if there ever is an end to this artist led poverty.
And the sandwich, the other cairn, the man, from England, with the yellow anorak, and the helmet, because his wife said, the photo, for the facebook, for the album, of the 284 munros, no 283 now, down again, mist.
And then we need to write the manifesto, a white paper to which all the art funders, the art organisations and the artist sign up to: no pay, no art. Or is this too radical? Is it too radical for art? Can I ask that question?
Rannoch, Beuys country, was he paid?, here in Rannoch moor, would he do the walk, if I asked him?, Walk Only When You Feel: Your Walk Starts Revolution, would the artists need to be paid, to do the walk? Would they stop the walk, when the pay stops, would they stop it, their own revolution?, down, the bealach again, the gullie, the snow, the path, slippery, from the rain, the sun, the moss, the little ferns, so tiny, hardly visible, like a little art, and then the boulders, off the path, magic boulders, the path, the big burn, the crossing, the path, the bridge, the green trees, so green, so many greens, the Asian family, a fence, a tourist, the car in sight, the tourist bus, the cameras, the car. 9 hours later.
Thanks Andrea, great day out!