Now, I am back in Huntly. Sorry for not posting earlier, but I only saw one internet cafe in the middle of Dogon Country. It must have been served by solar power, as I saw no power cables for days.

The African Photography Biennale was a real feast merging Cultures and political boundaries.

The highlights for me were the studio visits of Bamako based Abdoulaye Konaté whose work is a powerful commentary on political and environmental affairs. And also the one of Malik Sidibe, where we tried to get our portraits taken.

The shows I enjoyed best were the fantastic installation of Hassan Hajjij in the (can I have the Coca Cola boxed sofa for our new ly refurbished office in the Brander) and of course the panafrican show in the National Museum. Here it was the imagery of Ali Mohamed Osman that I want to follow up; his work around Port Sudan what goes out and what comes in needs to be seen.

I am also a long time fan of the work of Ursula Bieman and was glad to be able to catch up with her and see the very powerful work The Maghreb Connection.

Follwoing the African Photography Biennale, the trip around Mali was just fantastic and I am still recovering from all the visual and sound impressions I was subject to. Three of us, Kerryn from Tate Modern, Sarah the Curator for African Art at the Museum of Scotland and I tagged an extra week on the African Photography Biennal to travel the country. We flew first to Mopti, an amazing trading town on the Niger. A real visual feast, where we took a pirogue (a sort of Malian version of a Venitian Gondola) trip across the Niger to see some of the temporary settlements (people leave once the rainy season kicks in around July). 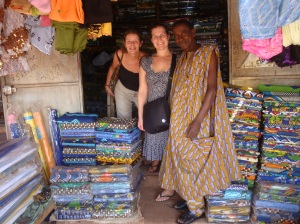 After that we went to Dogon country, and this is really where my good old Anthropologist’s heart was beating harder. A world full of ancient customs, trades and rituals. Only slightly infused by modern gadgets (although I read later that 3 of the 16 million Malians have a mobile phone that must certainly be one per household). Interestingly for our Calabashbank (www.calabashbank.com) project with Gemuce back home, cash and money seems still to play a minor role here. The world seems still to be ruled by self-sufficient farming and small scale trading/bartering. The key cash crop are onions which are produced in the tiniest fields. Otherwise one sees here a multitude of handcrafts: indigo making, weaving, pottery and of course farming. The little Dogon villages, like Tireli where we stayed are all homogenously made of mud; key features are the straw covered graineries, but also the intricately carved doors, the masks and other ‘fetishes’ as well as the villages ‘navels’ and the menstruation houses. We slept at Opomi’s, the chief in the village under a star-littered sky, only the wind waking us up from time to time with its relentless carriage of red sand.

I particularly enjoyed my first bowl of millet, the staple diet here. 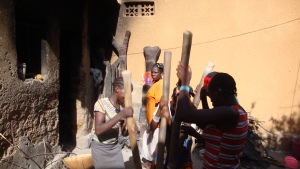 On the way back we went first to the amazing mud town of Djenne; with its even more amazing mud mosque, a must for anybody to see who is even vaguely interested in architecture. The vicinity of the mosque is surrounded by a very vibrant (if not exhausting (for us country bumpkins) market, with literally every trade under the roof of the world. I managed to buy a cloth that celebrates Obama, which was turned into a shirt for my son Michael who had his 16th birthday the day before I came back (earlier on I saw the english artists Marticn Parr in one at the Photography Biennial). I think he liked that better than the laptop he wanted so much.

After Djenne we had another night in Segou, another trading town on the Niger, where we had the luxury of a small swimming pool to get rid of some of the dust at least temporarlily. And then another highlight: we visited a traditional weaving workshop. This was an incredible and memorising sight. The cloth they produced was most intricate, I don’t dare to think of how cheaply it might be soldat IKEA or Habitat.

Back in Bamako, I had to handle the Calabash business. They were sitting there in 2 large boxes in the court yard of the trader; which after a bit of negotiations we managed to get on the Air France plane back with me to Aberdeen. Luckily Anna waited at the airport to fill her Fiesta to the brim with calabashes in good fresh and even sunny Aberdeenshire air.

Thanks to Kerryn and Sarah for accompanying me. Thanks to Kathryn Standing for organising the trip to the Bienniale where I made loads of interesting contacts for me to follow up now, with artists, curators and other people in the african photography and film making realm. Plenty of emails were awaiting me for this.

First thing this week I will follow up with a funding application to SAC (due on friday) where certainly some of the contacts and experiences are written into.