Part 1: A week inter-railing from Huntly to Montenegro and Albania

Day 1 (4 June): Scotland to Basel. Coming from Huntly the day before, we started our journey at Edinburgh Waverley with an Interrail ticket in hand to London. Changed at Kings Cross. Then Eurostar to Lille, change at Paris Airport, change at Strasbourg (very hot). Read Adam Kay’s book This is going to Hurt. Entertaining but too sad. A must read for everybody who wants to know about the inner workings of the NHS.

Day 2 (5 June): A day in Basel tanking in the much needed European summer heat. As well as love from my son. Highlight was swimming on the Rhine with the flow. People start somewhere with special watertight bags and end somewhere else. Some even go to work this way.

Lunch with my lovely Michael along the Rhine, after visiting the Basel bottle bank.

Day 3 (6 June): Basel to Zagreb. A day of train travel on Nick’s birthday through the spine of the Alps, ending in the Croatian capital. We are coming through familiar places, like St Anton, Kitzbühel, St Johann, Villach and are reminded of our 15+ year high alps on and off walk across the width of Austria from Lake Constance to Neusiedler See.

I read the book Die Kuckuke von Velica Hoca by Peter Handke in preparation to our visit to Kosovo. Twenty years ago, the Kosovo war began with NATO air strikes on Serbia. For Peter Handke, the Serb enclave Velika Hoca is the symbol of injustice perpetrated by the West. Once again, he wants to make poetic justice happen to the losers of the story.

Zagreb has one of the most wonderful markets in Europe

Day 4 (7 June): Zagreb to Belgrade by train. An hour wait at the borders. We see the lorries and cars queuing like a long row of Duplo on the horizon. Is this how the Irish border will look like in a no-deal scenario?

Day 5 (8 June): A day in Belgrade. We walk around in the heat and see the key sights. Icecream at a magic Patisserie comes to the rescue. In the evening we find a meaty restaurant with Balkan music. I exchange FB addresses with Zlavo, the double bass player.

Nick loves meat and so do the Serbian people

Day 6 (9 June): Belgrade to Podgorica by train and then Shkodër (Albania) by cab. One of the most beautiful train journeys in the world. The journey from Belgrade to Podgorica is one of Europe’s most spectacular train rides. It’s a marvel of engineering, with 254 tunnels and 435 bridges on the 296-mile journey. The journey rises to over 1000m in height and was built by Tito over 30 years as a ‘vanity’ project, but it is still worth the effort without the vanity of today.

Our train departing from Belgrade Topcider station; scenery along the train journey to Montenegro

Day 7 (10 June): Shkodër to Valbona by minibus and boat. The bus ride is rather ardeous, but the 3 hour boat trip is just magic. We meet Deborah and her friends in Valbona.

On the lake Koman ferry

Part 2: A week hike in the Prokletije or ‘Accursed’ Mountains between Albania, Montenegro and Kosovo.

Created as a peace project the walk is designed as a 10 day hike between the three countries once at war. This is 190km circular trail through the mountains was established in 2012 by local action groups with the help of German development aid.

Day 8 (11 June): Valbona (Albania) to Theth walk/climb over the Valbona pass. Hot all day, steep all day, but magic.

Day 9 (12 June): Theth to Vusanje (Montenegro) walk. Steep and hot again, at some point I was passing out, while sitting on a rock. We are passing many former bunkers on the Albanian site. Our host cooks us eggs, chicken and potato at our late arrival.

Breakfast in Theth; Albanian bunker from before 1990s

Day 10 (13 June): A day hike towards Plav. Even steeper and hotter today. We retreat on the top.

Old mosque in Vusanje; our host

Day 11 (14 June): A day’s rest in Plav. Breakfast in our place is bigger than our normal dinner. Deborah and I visit the market with its many handicrafts, then go swimming in the pristine lake Plav. The name Plav (Плав) is derived from Slavic plav, “a flooded place” (poplava, “flood”).

Nick gets the border permit from the local police station.

Hay forks made from branches at Plav market

Day 12 (15 June): Plav to Babino Polje walk through many forests and the most beautiful meadows imaginable. On the way we find a mountain lake. I love swimming in lakes, it is the best sense of freedom one can get. The hostel in Babino Polje has a reputation for excellent balkan cuisine. We eat till late, with a local Schnaps on top.

Meadows in the Peak of the Balkans

Day 13 (16 June): Babino Polje to Roshkenol (Kosovo) walk. Super hot and super steep to the pass. Three retired Montenegrinos meet us on the way and accompany us a bit with info on the area. On the way down we see the first huts with their Albanian flag. We know now for sure why this walk was created. The war was only 20 years ago. The round walk is both a symbol as well as an active opportunity to create a friendship between people and places.

The shepherds hut is simple, but comfy. We shower with the same jug the cow is milked with. 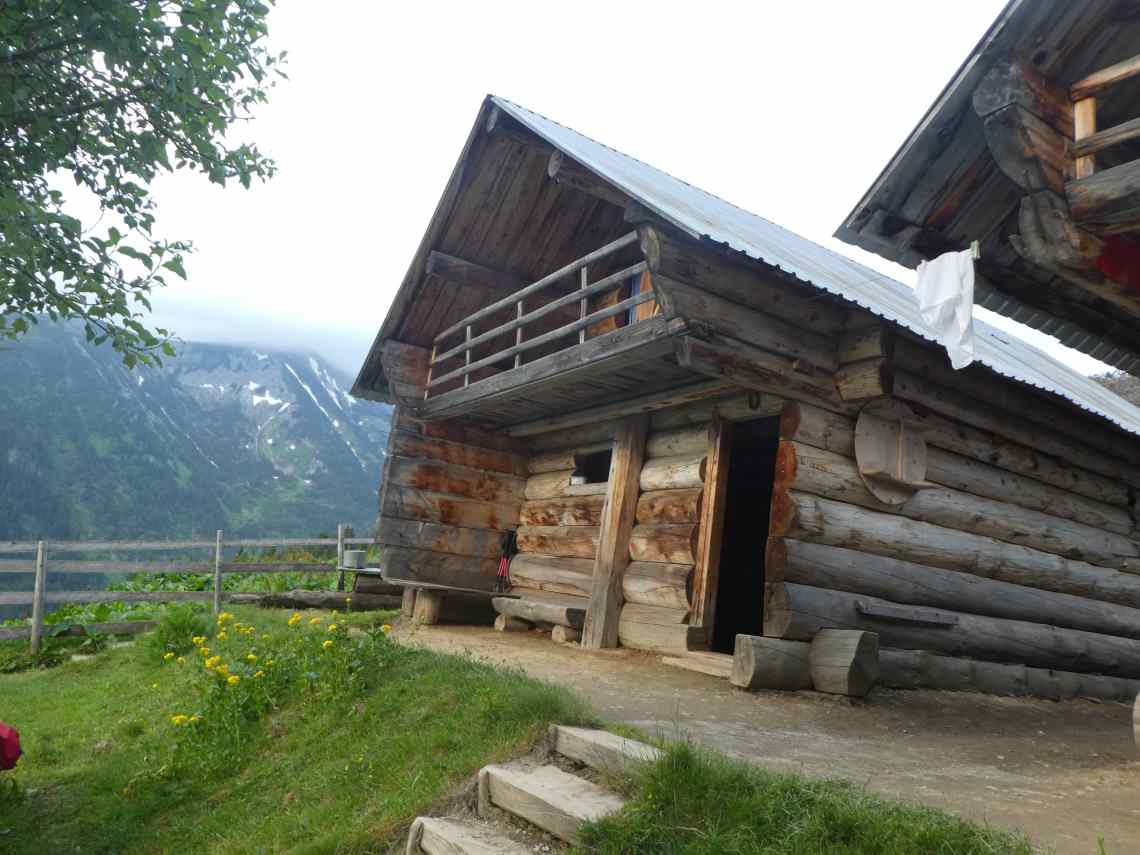 Day 14 (17 June): Roshkenol to Milishevc walk – I wonder whether I have more stuff in my rucksack than the shepherds in their house? I put it all out to count. Sad to say good bye to our new friends. Lamtumirë!

On the way I listen to the many cuckoos and think about Peter Handke’s book. A story, that does not dwell on the massacres, but on the fortuitous happenings of a traveller. He, like me only catches glimpses of places, normally the nice ones we want to see.

My rucksack content, before saying good bye to our hosts

Day 15 (18 June): Milishevc to Peja (Serbian:Peć) walk down the mountains over 1000m today. We pass a couple that lives in Germany but has now retired back here.

Peja had been bombed totally in the war 20 years ago. Relations between Serbs and Albanians, who were the majority of the population, were often tense during the 20th century. They came to a head in the Kosovo War in 1999, during which the city suffered heavy damage and mass killings. More than 80 percent of the houses in the city were heavily damaged or destroyed. Over a third of Kosovans had to flee to neighbouring countries or Western Europe.

We spend a lot of time in Peja’s cafes pondering about the incredible resilience of people.

We went to a nice restaurant on Toni Bleri Square. 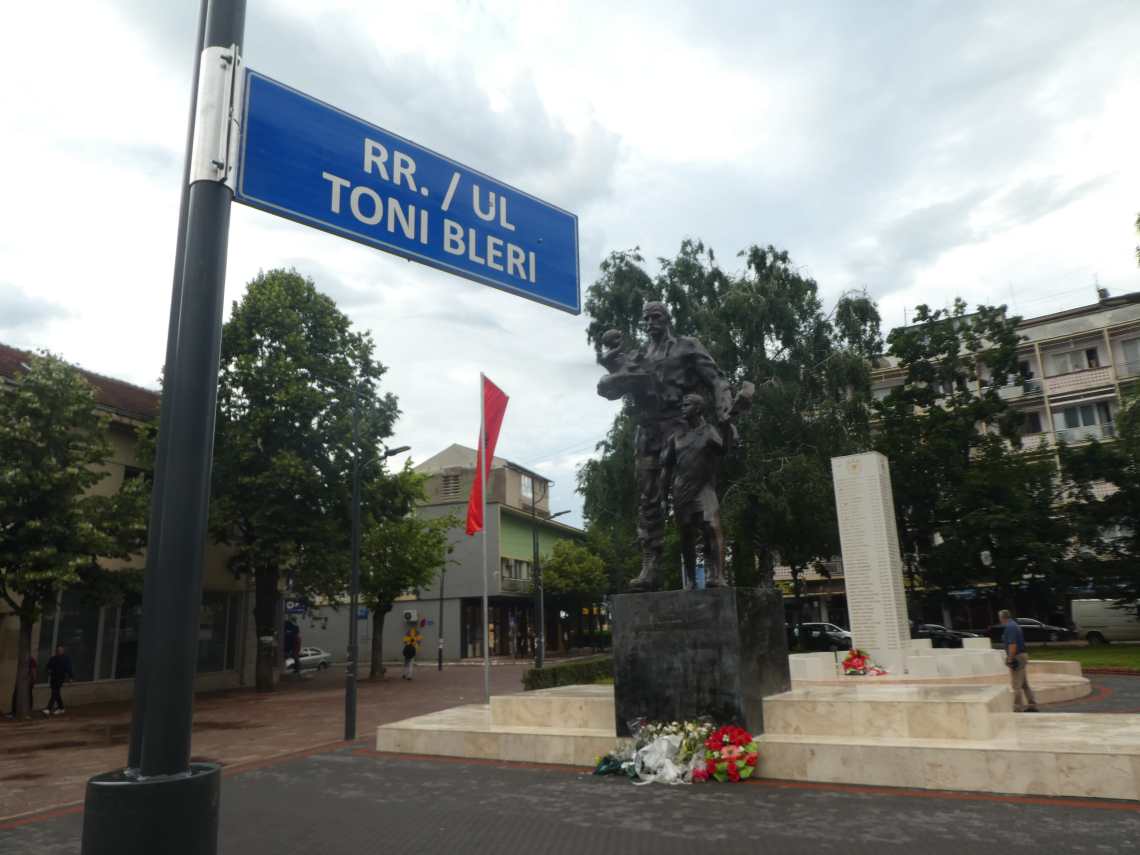 Section 3: By bus and other transport from Peja to Dubrovnik and back to Scotland

Day 16 (19 June): Peja to Priszen by minibus. We visit the UNESCO protected Dečani Monastery on the way. Apparently it has 30000 portraits. Austrian soldiers are guarding it. Our guide is a young man called Pavlo. He is Serbian, he does not speak any Albanian. The Serbian population in Kosovo is now under 3%. His village Goraždevac has only 300 inhabitants. But they won’t learn Albanian. He spoke good English though.

Prizren was less bombed, and therefore you find loads of historic houses there.

Day 17 (20 June): A day in Prizren (Serbian: Призрен) – where we wonder around caffes and historic sites (we count 16 mosques from our view of the hill side). We also visit some of its many wedding shops.

Day 18 (21 June): Prizren to Ulcinj (Montenegro) by bus over the high mountains to this wonderful ancient town. Spot me swimming on my own in the Dalmatian sea.

Day 19 (22 June): Ulcinj to Kotor – stunning but slow ride along the bay of Kotor. The formerly Venetian town is not that much bigger than Huntly, but is drowning in tourists (my opinion!)

Day 20 (23 June): A day in Kotor. We get up early and walk up to the fort, which takes about 2 hours round trip. Its too hot and we spend the rest of the day in our B&B on the balcony watching the tourists, while we have a nice bottle of Montenegrian wine.

Day 21 (24 June): Kotor to Dubrovnik by bus. Dubrovnik must have been nice once. But now it is tourist hell. Over 4 million per year, or 11500 per day stay here. Plus all the day trippers coming in from roasting at the coast. This is too much. A friend of mine tells me later, that the Dubrovnikos find it hard to live here and they are therefore thinking to build a city underneath the city, for people to walk faster from home to work.