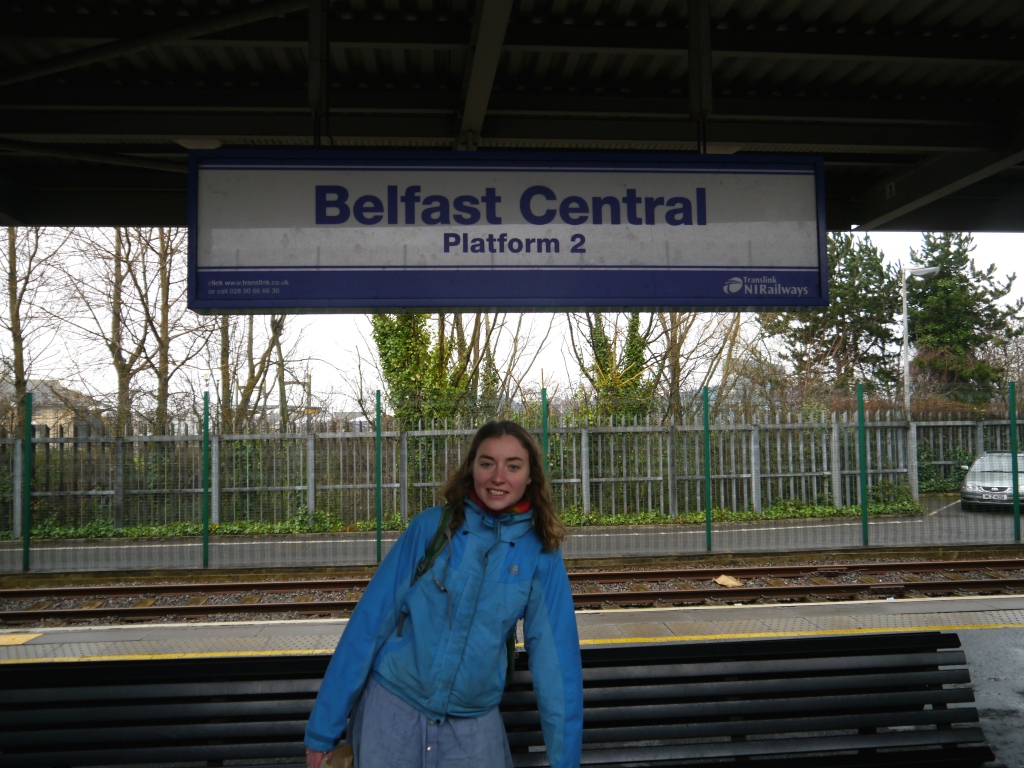 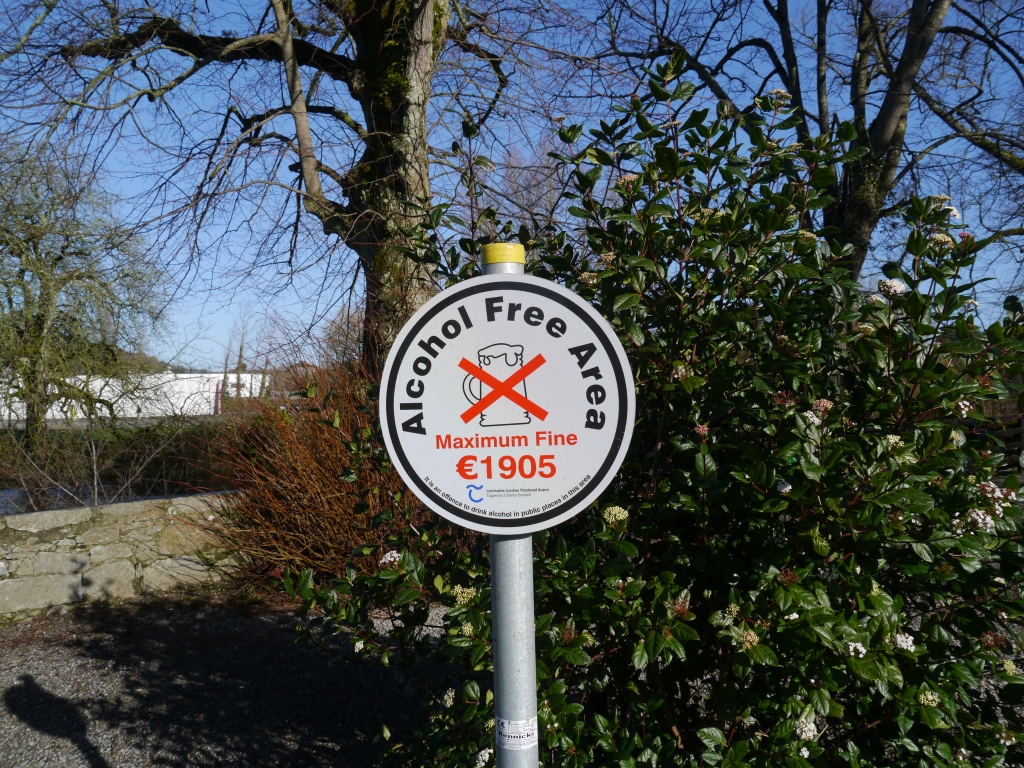 Bril breakfast, love the soda bread, try the white pudding, lots of rain, down to the art school, an old religious institution for unmarried mothers, the confession cupboard, now housing the hoover, bucket and mop, (Nick later asks if it was an art work?), here the girls and ladies, with the illegitimate children were housed, worked for the nuns the children of to adoption, now its art school, over to MASpace, it made its name through a focus on social practice, students waiting, hello to Marilyn, hello to Sean, they run the course here, talk, my mouth gets dry, loose my voice, good questions, about the exit strategy, how to get out of it again, lunch, with the nurses, Marilyn tells about her projects, a Spirit Store in Limerick, WayMark, a Northern Ireland border walk, daisy-chain connecting the ramblers clubs, smart idea, but how to get out of it, after the launch?, she also walked the Santiago; I learn about the loophole, if you get to Ireland, you are in Schengen, and then there is no more passport, (later check, this is not right, they kept out too, shame I had got excited), to NI – the occupied territories, a new term, I learn, I ask about the going to mass, in Latin, as back then in Cashel, no, not so many anymore, because of the scandals, many lost faith, tutorials, a lady wants to create a crèche for mobile phones, nice idea, if she focuses on exactly that, no exhibition, another one wants to connect her passion for traditional boats with her art, stick to it, I say, another one, I tell about ‘complementary’ therapy; off to the train station, miss the bus, luckily, as there is a superb exhibition at the Limerick Art Gallery, Abigail O’Brian photographs/films yeast dough in the making, its wonderful for every baker, mesmerizing, nice baking in the café too; bus to Cahir, 1 hour, B+B in Castle is freezing but full of character, walls are 60 cm wide, off to town, a pub, man tells us about the queen’s visit, very honoured, very important, the hotel, for a seafood chowder, wonderful, the cheese too, the heater is on return, keeping the ghosts away. 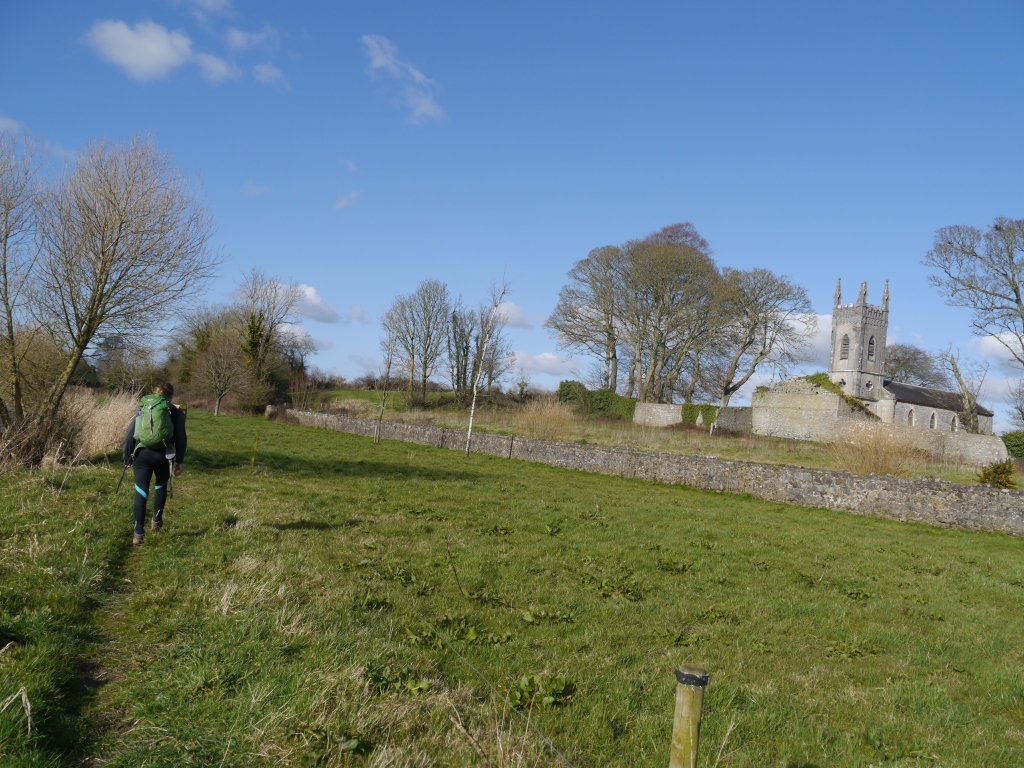 B+B lady does not like us getting up early, 9am is too early in Ireland, she says, detects my German accent, we get away by 9.30am, first lost in town, then the Tipperary Way, 30k to Cashel, like a home coming, it feels, the weather is sunny, almost warm, the green fields steam, through the woods, past Glebe, then the wee road, it’s a long way to Tippera-a-ary always in my head, wished I knew more of the song, not just the first line, I think it is a WW1 song, a Madonna, hills in the distance, along the river Suir, past a castle, and another one, an ancient graveyard, and an Abbey, to Golden, cup of tea, in pub, men watching horse race, in Cheltenham, on we go, it’s a long way…, along the Veir, flooded sign, we ignore it, wheat, detour, farmer, detects my accent, knows Lorcan Keenan, his doctor, knows the Savages, they all know them, back to the river, so muddy, then swampy, then a lake, I jump through it, with great strides, soaked now, totally, but the weather is nice Deborah prefers the brambles, spikes or wheat, that’s the choice, horses, off to the road, a bit busy, but only 2k left, till we see the sign of Cashel, meet a woman, ask her for the way to Copperfield House, she detects my accent, knows Lorcan Keenan, her doctor, knows the Savages, ‘you walked’, she says, ‘all the way from Cahir?, Holy-Mary+Jesus’, she screams, round the corner, we find Copperfield House, this is where I stayed a long summer, to learn English, England was too dangerous, back then, to learn English, because of the Irish, at least this is what my parents said, I stayed with the Savage family, Emer, Donal, Peter and Barry, Mauve had moved out with Lorcan, the doctor, my wonderful summer in Ireland, never forgotten, it took over two days, back then to travel back, by train, to Munich, via Dublin-Liverpool, London, Dover, Brussels, nothing special, today it is odd, to travel, even just from Scotland, by train, Josephine and Liam, the new owners, had bought Copperfield House from Mrs Savage, back in the 1980ies, its still a B+B, they make us welcome, potato soup and turkey, and apple pie, and the lovely bread, and stories, of the Savages, Lorcan, their doctor, his family, who still visit, some time, they know of Emer, and Don, of my time in Cashel, the going to church, to mass in Latin, not so many go anymore, says Liam, because of the scandals, people lost faith, we are tired, … it was a long way to Tippara-a-ry …. 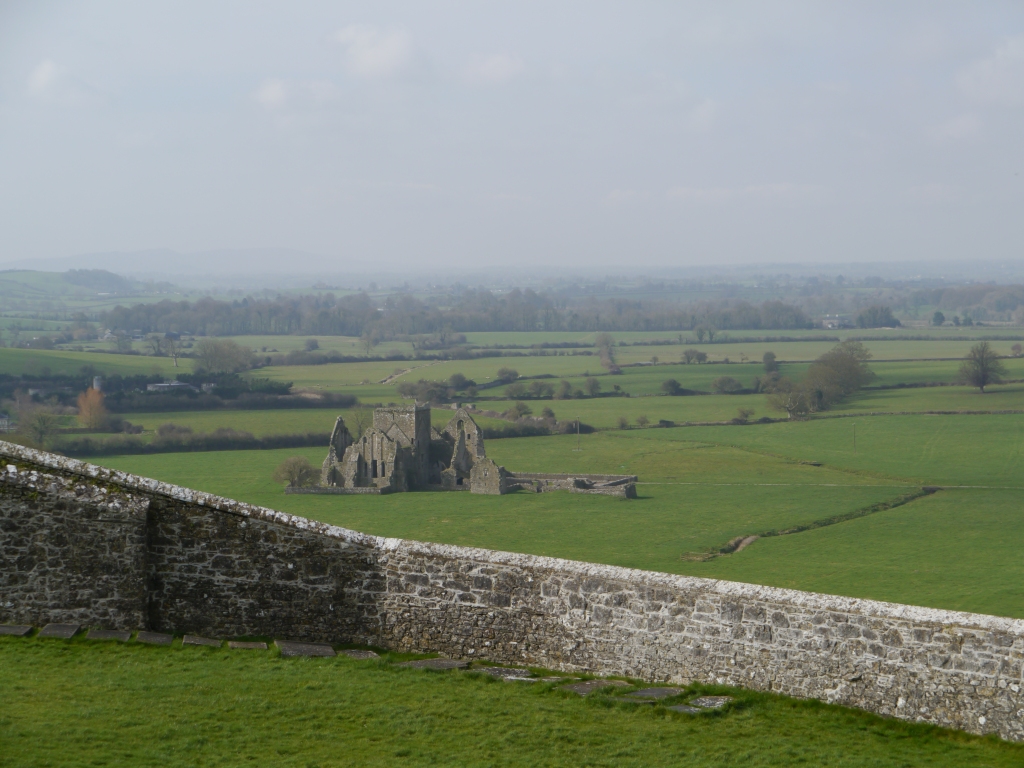 Wake up in Copperfield House, bright sunshine, salmon and poached egg, off to see the rock, and the abbey, and the museum, the church, the bakery, the glittery green shamrock garlands, buy a nice red knitted jumper, visit the cattle mart, then some scones, the cemetery, cant find anybody, the church, where we went so many times, mass in Latin, back then, not so many people go now, we are told, due to what was happening, in the churches, in the convents, the schools, to the children; the green pub is nice, ask the publican if he is Catholic, he nods, I am on lent and should not drink, is it a bigger sin to drink during lent? or not to drink when you are back in Ireland for the first time in 40 years?, the latter he says, definitely, he knows, about sins, I drink a pint of Guinness, it never tasted better, next to the fire, all as it should be, the restaurant had black pudding salad, Irish coffee, prevented me to sleep, so good it was, an arguing couple outside, after midnight, kept me awake too, clack-clack made the high heels, hope she got back safely. 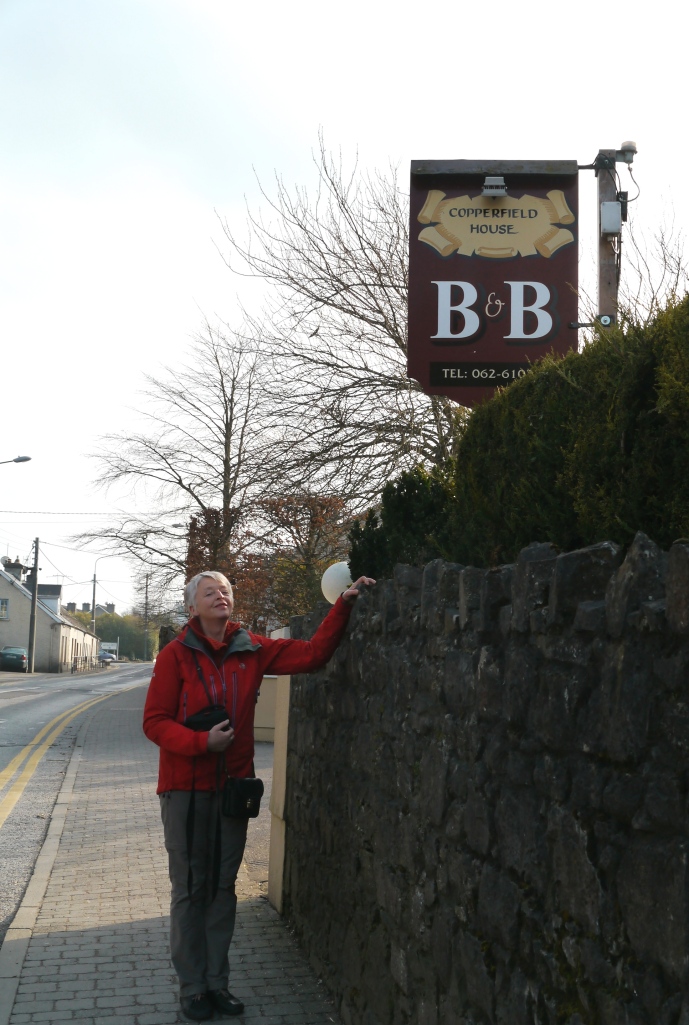 Wake up to nice card, made by Deborah, its mother’s day, a drawing of Ireland and a daffodil, its mothers’ day…, bus to Dublin, kiss kiss, back by plane; it’s a short way…back home…,
next day is our wedding day (Nick gets the blessing, from Cashel’s priest, he mumbles something of reformation)

Thanks Deborah for the great company! 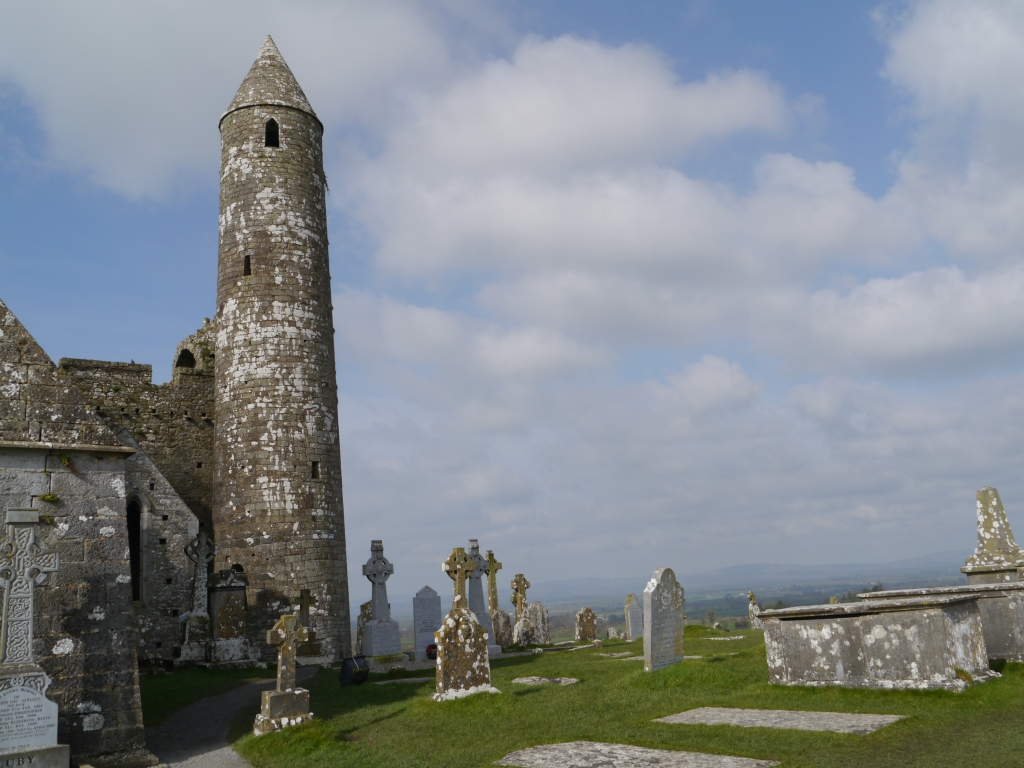 View all posts by daclaudia